It always feels good to be back. Godzilla had fared better than the apartment in terms of infestations – just the usual squirrel poop we’ve come to expect, since the place is wide open.

What I like best about returning, apart from seeing the house and getting all pumped up about it again, is the welcome we get from the community. We aren’t there as much as we used to be and we’re obviously peripheral to the tight-knit local group, but everyone notices when we return, even for a couple of days, and greets us. 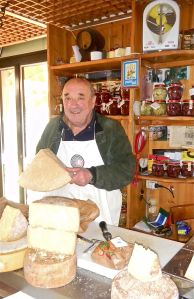 There aren’t very many people in our little hamlet and a lot of them seem to be related. The family who runs the local bar and restaurant (Albergo Picetti)) is a good example. The father sold us part of our land. One of the sisters is married to our contractor. The other sister is our neighbor, whose husband helped us get rid of the junk in the Clean Team episode. They just moved in Monday to a new house that took them six years to build. We used to joke that it was a race to see who got their house ready first, but their six years now looks miraculously fast compared to us. Seeing that they’d actually moved in, we stopped by to admire their new digs, their new baby, and have a coffee.

Our apartment overlooks the bar, so when we hang out our windows we can shout greetings back and forth to the people coming in and out, in typically noisy Italian fashion. That’s how people know you’re there, when you stand around in your window. I’m not always completely certain who they all are, but they know us as the Canadians who have inexplicably developed a fondness for their remote corner of the world. Even the old men who have been playing cards at the bar for decades mutter their recognition, sometimes smile, and make a space for us to have our beer.

I love this sense of familiarity and community, however peripheral we may be. The cheese man at the grocery store greets us with the informal ciao now, a sign of acceptance in the formality of Italian society. He shook my hand when we were leaving and asked when we’d be coming back; he knows we always do.

Here’s what can happen when you leave a place closed up for much of the summer in the countryside: nature colonizes it in your absence. We keep a small apartment near Godzillavilla, so we have someplace to stay whenever we need it. When we arrived the other day the rooms were dim because the protective blinds were down on the windows, and as I went through the kitchen to open them, something crunched underfoot. That’s when I looked down and saw masses of wasp bodies on the floor, killed by autumn’s cold. The creatures were huge by Canadian standards, but then every bug is bigger in Italy. 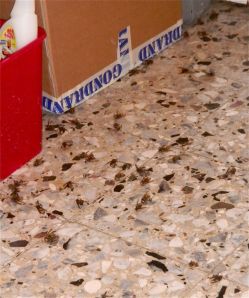 When did the terrazzo turn crunchy?

They were also littered about the living room and in the small bedroom, oddly amassed on the pink rug (did they mistake it for a huge flower?) but mercifully not on the beds. Our landlord Gino was coming up the stairs so I called him in to inspect.

“Hmm,” he said, advancing through the apartment, “they must have made a nest.” Crunch, crunch, crunch. Nichola and I had been gingerly stepping around them to avoid the extremely creepy sound of large, desiccated bug bodies popping underfoot. Gino was unfazed. “Well they’re all dead,” he observed cheerfully. Crunch. The hair was standing up on the back of my neck by now. I was trying not to look like a city wimp, but I winced every time he took a step. Crunch. “In the spring we’ll be able to find the nest,” he concluded, “but they won’t bother you now.” Indeed. Crunch, crunch as he made his way back out the door. 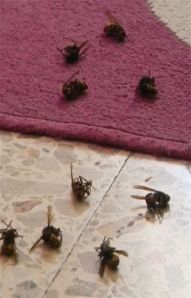 Off to that giant flower in the sky

We spent the next hour vacuuming them up. They rattled their way up the vacuum’s long tube, ricocheting noisily off the plastic along with a hundred or so dazed flies that had congregated in the relative warmth of the window sashes – these we discovered on opening up the windows to air the place out, whereupon they spilled onto the floor, milling around in startled huddles.

In many years of reopening the apartment after a long absence, we’ve only ever encountered a few spiders and a minor number of flies. Could this revolting influx be because we didn’t stay as long as usual this past summer? Now I have my excuse to make sure I’m around for longer during the next warm season.

I decided yesterday to go to Europe for a break next week. I looked at my work and personal schedule and suddenly realized that it was possible. Good enough reason for me! My daughter – even more impetuous – decided today she’s coming with me. This is a by-product of having raised children abroad, you create 19 year-olds who want to spend their hard-earned money exercising their global citizen status. I have to say, I kinda like it.

London first, then Milan and down to Varese Ligure. Visiting friends and old haunts and generally reacquainting ourselves with our past.

We’ll be looking at Godzilla with the contractor and deciding what to tackle next. Just the thought of being there lifts me from my day to day and puts me in a joyful space. We rent a little apartment year-round just up the road from the villa, since that is still uninhabitable. Although the apartment is rudimentary at best, it does boast a view out the bedroom window that is the same sky and valley as we will someday see lying in bed at Godzilla. It’s vast and silent. It makes my dreams serene.

I can hardly wait.

Last blog I talked about the massive stone walls that comprise pretty much every vertical in Godzilla. However, there is one wall in the house that’s built of bricks – so of course we wanted to get rid of it. Apart from the obvious satisfaction of exerting our will over the space, it would actually make the difference between having an open space living/dining area instead of two pokey little separate rooms. 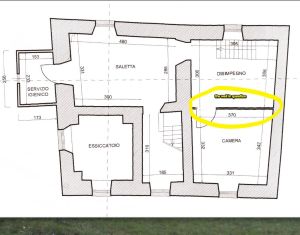 One day my daughter Rachel and I were staring at this wall and talking about how great the room would look without it. This was during a ‘non-building’ phase, a frequent state due to the way money traps like Godzilla run short of funds, and we were a little frustrated by the lack of action. It occurred to us that although we had no construction workers or equipment, we did have a tool box. It’s one of those DIY store ‘complete home tool kit’ sets; twenty useful items in a box the size of a briefcase. In it was a ridiculously girlie-sized sledgehammer, with the heft of something you’d use to hammer tacks. A ‘sledgette’, if you will. So naturally we decided to see if we could destroy a brick and mortar wall with it.

You may be noticing a pattern here; I seem to be easily egged on to crazy acts in the company of enthused people. And voila, the result: girlie victory over the living room wall! 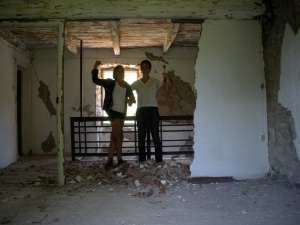 If you want to see a video of this adventure, here’s the YouTube link:

By the way, the music is Zucchero’s ‘Diabolo in me’.

We did stop short of taking the whole thing down, since it does appear to be helping to hold up a massive central beam that is not sitting in the outer wall very solidly. But how good the space looks now, all open and bright.

Everything about Godzilla is wonky. At 7×10 metres and 3 stories, it seems pretty big – but once you allow for the thickness of the stone walls, the inside measure is a lot smaller. Having been built in stages over centuries, every inside wall was once an outside wall, and the stabilizing technique was essentially ‘build it super thick at the bottom and a little less thick at the top’. Kind of like the pyramids, but with less accuracy in the stone cutting. 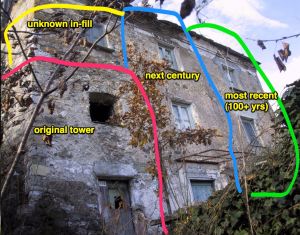 So all the walls are at least a metre thick, and sloped. Also, no-one over the course of centuries seemed to have access to a right-angle, so every room is a rhomboid. It’s like walking through a Midway fun-house full of shape-distorting mirrors.

We call this Rustic Charm. 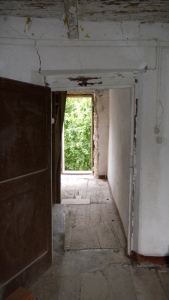 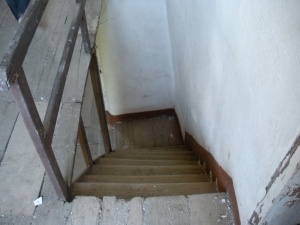 In terms of space planning, it means whatever the existing layout, you’d better love it. Knocking down a metre-thick stone wall is an excavation, not a renovation. They also intermesh in a way that keeps the whole thing from falling apart; it gives a whole new meaning to the term ‘supporting wall’.

So this isn’t going to be a modern, open-plan house. Our choices are limited. However, next blog we’ll see just how far a little enthusiasm can take you in redefining your space.