When your so-called vacation home is more or less a pile of rubble, it does alter what you end up doing when you take time ‘off’ to visit it. Any vacation house takes some maintenance. Certain things, like the cleaning you do when you arrive after several months away – the opening up of shutters to let the light back in, sweeping up spiders and flies, shaking out the duvets and generally reclaiming the place as your own again – feel like happy gestures of affection. Like de-tufting the family cat. Or a gorilla picking lice off its mate. Not fun, exactly, but somehow gratifying.

With that kind of vacation home, once you’ve put in your bit of sweat, you still have plenty of time to kick back with the wine.

Hey kids, want to do some fun clean-up on our holidays?

With Godzillavilla, the work was so endless that physical effort was always part of the holiday agenda there. I’d go with some tasks in mind, and feel as though I had to complete them or it wouldn’t have been worth spending the money on the trip, as thought the labour rationalized the expense. I actually like doing this kind of stuff, so I found it pretty entertaining. The rest of my family, not quite so much.

Everybody did help out, and we did sometimes have a lot of fun and satisfaction doing things together (as in the Triumph of the Sledgettes Part I). But so much of the work was really gross, such as getting rid of the disgusting rotting mattresses, or apparently futile, such as hacking back monster vines only to have them reappear with greater vigor the following year, that it was hard not to be put off.

We did have our moments

As a family, we had no real method for dealing with this. No agreement as to what things we all wanted to tackle, how much time should be spent on them, when we could justifiably call it quits and just enjoy reading under the cherry tree. We kinda worked it out by feel, and it was never a matter of controversy or argument.

But here’s the thing: because I was the one who really enjoyed the work, and went there specifically to do some more, sometimes with like-minded friends instead of family, the project started to become more ‘mine’ than ‘ours’. I still got excited about the struggle of making it happen, while the rest of the family was just wishing we had a place that was already done. It could be said they came to a logical conclusion long before I did. Our collective commitment to the physical, financial and emotional effort involved in seeing the project through started to wane. My own efforts began to feel crazy in the face of the magnitude of the task.

The madness of an endeavour like Godzillavilla needs constant reinforcing (Yes, it’s OK to enjoy doing construction work on your vacation! Moving those moldy mattresses will be so gratifying! It’s good exercise to hack those vines back for the hundredth time with nothing but a machete!). It’s really hard to hang on to your commitment when the project takes so long and life changes along the way. And when that commitment goes, grim reality stares you in the face until you finally accept that this is a madness that is bound to follow the law of diminishing returns.

Advice: Most people don’t take on a project like this solo. I wouldn’t recommend it, in fact. The effort is huge and in times of discouragement you need someone who will either commiserate or bolster your spirits. But whoever you do partner with on a project of this nature, you have to be sure you are both/all totally committed to doing what’s necessary. It doesn’t have to be the same thing – one of you can like detail work, one of you can like the massive, destructive stuff, one of you can like dealing with the finances (as if!), or the electrics, or whatever. But everyone needs to have a role that will connect them to the process of renovation, engage them in it, and by extension connect them together with the common goal of building of a wonderful home. If you don’t do that, it starts to look a lot like it’s just the big, tough job of fixing a dilapidated house. 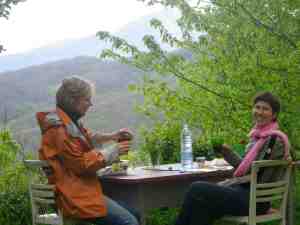 Aah, but what we did for the other 8 hours that day…

2 thoughts on “Wine and Sweat”